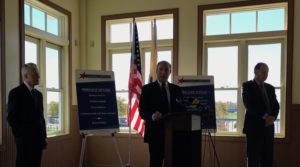 Perth Amboy-area newspaper the Home New Tribune covered Governors Tom Kean and Jim Florio taking The Civic Pledge with a front-page story in the Thursday, Oct 13 issue. Perth Amboy Civic Trustees were in attendance to witness two of the most high-profile public figures in New Jersey take The Civic Pledge in front of a crowd of 60 people.

The Citizens Campaign brings to the Civic Challenge Campaign a track record of helping citizens to advance solutions on the local, county and state level, and the support of Kean and Florio, according to Campaign Leaders, demonstrate the strong bi-partisan backing for this effort.

“To repair our democracy and restore the fraying connection between the public and our government, citizens must realize their full power to fix our government,” Kean said during the event. “The Civic Challenge provides them with the road map to doing so. Jim Florio and I urge all New Jersey citizens to join us and take the Civic Pledge today  It is the first and most important step toward restoring a healthy democracy.”

“Governor Kean and I are here together because we know that an engaged and problem-solving citizenry is the key to fixing our broken system,” he said. “We can all answer the Civic Challenge and make New Jersey the lead state in this movement to restore sanity to our politics and government.”

The Civic Challenge Campaign works to give citizens greater access to government records on current policies, including staffing and costs, and the technological ability to search for solutions with evidence of success. Citizens Campaign leaders noted that up until recently, this kind of information, which gives regular citizens the potential to play a significant role in developing government policy was the exclusive province of elected officials.