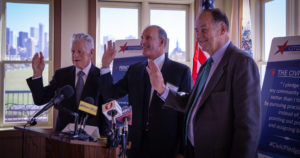 Coverage of Governors Tom Kean and Jim Florio was featured on radio station New Jersey 101.5 by reporter David Matthau. He emphasized the bi-partisan nature of this major event in the Campaign.

“Kean, a Republican, said he’s taken the Civic Pledge and he’s encouraging all Garden State residents to do so as well because our Constitution begins with the words ‘We the people.”We the people is all of us together, and it’s only with all the people, all of us together, that we’re going to be able to get this done,” he said. “They can make this city, this state, this country a better place, and that’s why this Civic Pledge is so important, particularly now, when some of us have lost a little faith.'”

“Florio, a Democrat, said it’s important for people to become educated and participate in shaping the future.
‘Old policies are not going to deal with new problems. We’ve got to get people engaged and involved,’ he said. ‘Engaged because that’s the way our system works. It’s called participatory democracy. If we don’t work at making it work, there’s going to be problems.'”